Radically upgrade your Entity Framework chops by only retrieving the columns you actually want from your database, including nested classes and even single element projections!

This is one of the more intense blog posts I’ve written, as getting my head around how Expressions and Projections work, especially when dealing with Entity Framework, has been an absolute mind-bender.

In this post we’re going to cover a few very important upgrades we can make to our Entity Framework linq queries, such that they produce the cleanest and most efficient SQL queries possible. In short these are:

Before we get started, let’s look at the entities we’ll be using:

A projection is just a way of mapping one set of properties to another. In relation to Entity Framework specifically, it’s a way of translating a full entity (database table) into a C# class with a subset of those properties. The values can also be altered/joined/removed on the way through as well. Anything you can do in a SELECT statement in SQL is possible.

The simplest example of this is just the regular old .Select() linq statement.

Which returns a nice bit of sql:

Easy peasy. We’re all done. Entity Framework takes care of the heavy lifting when translating projections into SQL queries. Let’s knock things up a notch and take a look at how we might reuse a projection.

Now that we’ve mastered the art of writing right to left assignments, let’s see how we can pull that projection out on it’s own.

This is where we begin to see our new friend Expressions. Here’s the code:

and to use it:

Now the code above is just a normal readonly property (public int myProp {get;}) but here we’re returning an Expression. The beauty of expressions is they describe what’s going on without actually executing anything. It’s kind of like a blueprint, given an instance of Vendor, here’s what I’d do to get an instance of VendorListItem.

Expressions are the fundamental technology that allow Entity Framework to translate linq into sql queries in the first place, because it can read the blueprint all the way down and decide how best to turn it into SQL statements.

A great example of a simple query broken down into it’s expression components can be found here: https://stackoverflow.com/a/8315901/80013 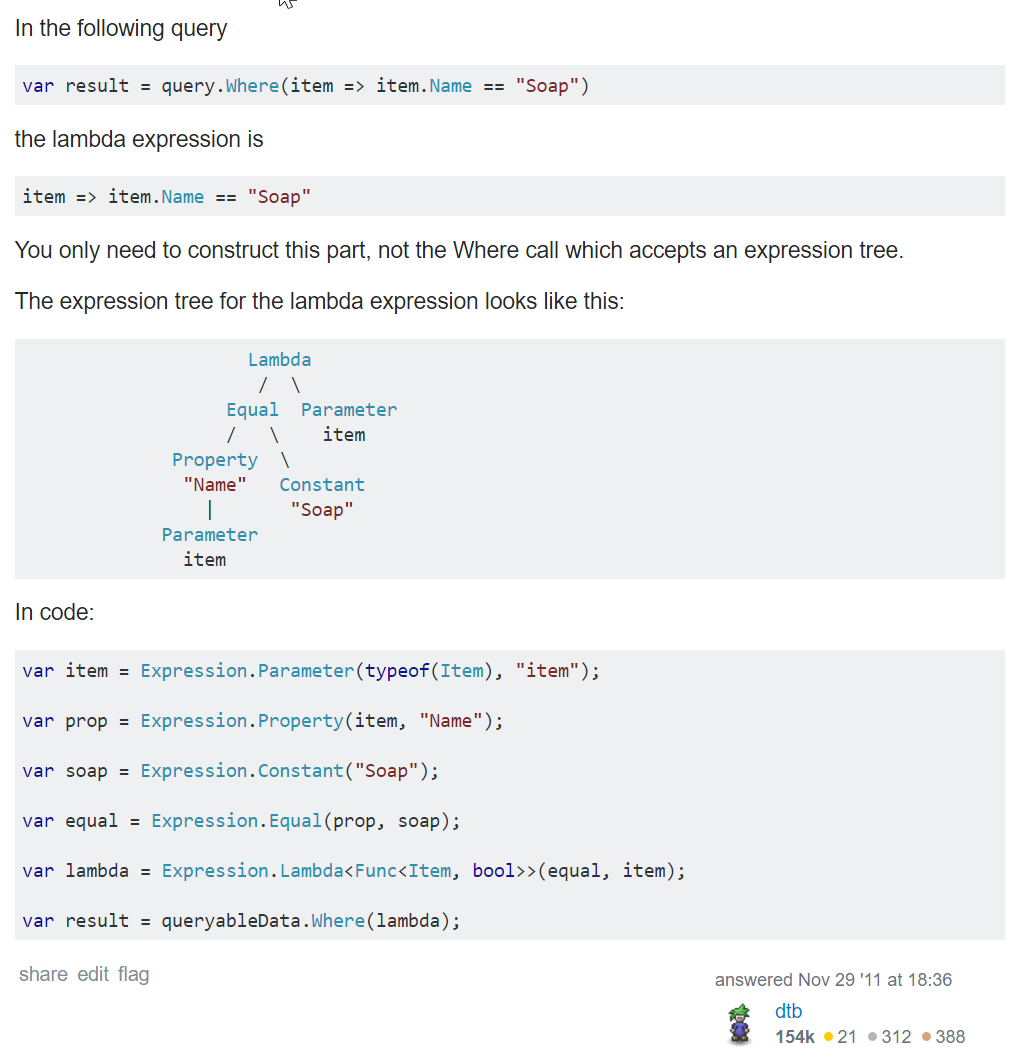 Now that we can easily create expressions, it’s a relatively simple exercise to start nesting them.

VERSION WARNING (EF Core 2.0.0): At the time of writing nested collection projections only work in memory, defeating the purpose of using them in the first place. This will be fixed soon, so it’s still worth understanding. They DO still work for nested single element projections which we’ll learn about in the next section, so keep reading!

Let’s take a look at one more level down:

OK. So here you can see that we’ve basically just done the exact same thing with the fruit model, as we did with the vendor model. We’ve created a projection and used it to map some properties. The one thing that you need to do to get your nested version working is make sure you add .AsQueryable() to your ICollection property (x.Fruits), otherwise the compiler thinks your trying to perform a task on the IEnumerable.

Let’s take a look at what SQL this generates:

Now obviously this isn’t ideal yet, since we get two queries instead of one, but we can control which data is sent back to our users and once the underlying EF bug is fixed, we’ll have more efficient SQL too.

This is by far my favourite discovery of recent years. You can apply the same projection techniques above, but this time to properties that aren’t collections.

Firstly, mad props to the Entity Framework team for their tireless work getting EF Core up to speed. There’s still a ways to go, but the linq query translation has been significantly improved. We’re at the point now where the following very simple code will let you project a single element property.

This used to break in EF Core 1.x, so it’s a huge relief to be able to post this simple code and say GET GOING! But the problem with this code, and the reason it used to break before now is that it does not get translated into SQL. Instead, Entity Framework stops walking down this expression tree and applies the projection after the query has been executed. This results in some nice and neat code, but it doesn’t help us remove unnecessary columns from our query. Let’s take a look.

Our linq query looks pretty much the same:

and the resulting sql is neat and efficient:

but you can see that it added [x.Category].[IsImportant] which is not part of our projection. To truly improve our sql queries and have Entity Framework understand our projections all the way down we need the help of an Expression Visitor.

The following code was taken from Luke McGregor’s repository called LinqExpander and updated to support .NET Standard 2 and Entity Framework Core 2.x async queries. It was inspired by his blog post Composable Repositories - Nesting Extensions where he talks about single element projection.

You can find my updated fork of the code here: https://github.com/bjcull/LinqExpander. Consider it more of an academic repository, than a working library to be distributed.

To start with, go grab the code files from my repo above and copy them into your project. It’s something like 6 files and it’ll be nice to poke through them as you use them to better understand what’s going on.

Next we’ll update our query by applying our fancy new code to it.

Firstly, update the linq query to the following:

The new .AsExpandable() lets us wrap the internal QueryProvider with our own custom one, which lets us control how we walk down the expression tree.

Next, we’ll update our single element projection class. Update the CategoryModel class to look like the following:

The only thing we did here was add the ReplaceWithExpression attribute to the FromEntity method, and that’s all we need to do. Here’s the updated and lean sql that is generated:

To quickly describe what’s happening here before diving into the details in the next section: When our custom QueryProvider walks down the expression tree it checks each step for the ReplaceWithExpression attribute. Before when it reached the FromEntity method Entity Framework would stop walking and return. Instead, our code replaces that node of the expression with the one referenced in the attribute. In our case, Projection which is an expression, and can now be walked down as well, letting Entity Framework continue to translate our linq into sql and leaving us with the most efficient translation possible.

Phew! I suggest you try this code out for yourself, it’s a really great exercise! Continue reading if you’d like to know how the underlying code works in a bit more detail :)

OK Let’s dig into the underlying code and follow what’s going on.

The main thing that this method does is take the existing IQueryable and wrap it with our own custom ExtendableQueryProvider. The actual type returned by the CreateQuery method is an ExpandableQuery<T>. It also does a check to see if our IQueryable is already an ExpandableQuery which means you can safely nest the call to .AsExpandable() if you build up your queries using multiple methods.

I’ve purposely skipped over the ExpandableQuery<T> class, as it’s basically just an empty wrapper on an IQueryable. Check out the repository if you want to take a look at it.

Next, we’ll look at what that ExpandableQueryProvider is doing.

To start, the CreateQuery() methods create a new ExpandableQuery<T> with the current ExpandableQueryProvider substituted as the Query Provider. This means that when the query is executed, it will call one of our own Execute methods.

Each of the Execute() methods wraps a call to the underlying query provider (Entity Framework) with one important difference. We call the Visit() method on the expression we pass in.

This is where things get a little mind-bending, so here’s my best explanation at what’s going on.

Overall, our ExpandableVisitor is an ExpressionVisitor, which is a class that handles ‘walking down’ the expression tree.

Firstly, we’ll look at the VisitMethodCall() method. This method is called when the visitor encounters a method in the tree (instead of another expression like a lambda, or just a plain old value). In our case this only happens when the FromEntity() method is encountered. You can safely ignore the first 13 lines of VisitMethodCall(), as this is extra support for a method of expansion that we did not look at in this blog post. Instead take a look at the line that creates the replaceNodeAttribute variable. Here, we’re looking for our special ReplaceWithExpression attribute. Since we did add this attribute to our FromEntity() method, we fetch the attribute and continue.

The next two if statements are basically the same, supporting either a replacement method, or in our case a replacement property since we used PropertyName in our attribute. We use reflection to fetch the Property that we referenced, in our case it’s our Projection. Next since the projection is indeed a LamdaExpression, we pass the expression, along with the arguments from our Expression tree node to the RegisterReplacementParameters() method.

Jumping down to the RegisterReplacementParameters() method, first we have a quick check to make sure that the number of arguments supplied matches the number of parameters that the Projection wants. This is usually just one for our projections (the entity being projected). If they do match, then we save the parameter/argument pair into a dictionary for use in the next step. We’ve now completed the RegisterReplacementParameters() method and the next line where we left off in the VisitMethodCall() method is return Visit((replaceWith as LambdaExpression).Body);. This is a recursive call to our ExpandableVisitor, but since this time the node we passed in is an Expression and not a method, it doesn’t call VisitMethodCall(), instead it attempts to process the Projection, and during this processing we hit the next overridden method, VisitParameter().

VisitParameter() is hit each time the expression calls for a parameter. In our case this is the x in our projection, but cleverly, instead of parsing the parameter, it replaces it with the original argument passed to the FromEntity() method, which is a MemberAccess expression instead of a parameter expression.

This is a little complicated and I’m making up this syntax for clarity, but it means that we started with this:

then we replaced our method with an expression kind of like so:

then we replaced our y parameters with member access expressions which compiles down to:

Phew! Hopefully this makes sense. I’ve got to tell you, even in the thick of writing this article I’m still learning the intricacies of expressions and how they’re constructed and parsed.

Hit me up on twitter if you have any questions or corrections :)